Theodore R. Schrock, M.D., who had a storied career at UCSF, as a medical student, then a surgery resident, faculty member, Department of Surgery Chair and Chief Medical Officer for UCSF Medical Center, recently passed away at age 76.

Theodore (Ted) Schrock was born and raised in Berne, Indiana. He lettered in three sports during high school and was noted for scholarship. He attended Indiana University in Bloomington where he was elected to Phi Beta Kappa and was named “Premed Student of the Year”.  His A.B. degree with Highest Honors was obtained after the first year of medical school at UCSF, where, as a senior, Ted was President of the Student Body of the UCSF campus.  He was elected to the Alpha Omega Alpha honor society, and upon graduation in 1964, received the Gold Headed Cane as the student who most exemplified the qualities of the true physician.  He served as President of the Gold Headed Cane Society for 12 years.

Dr. Schrock entered residency in surgery at UCSF, spent two years as a Research Fellow at Harvard Medical School, and completed residency in 1971.  He was immediately recruited to the surgical faculty at UCSF, where he would spend his entire 33-year career in academic medicine. During this time, Dr. Schrock developed an international reputation for excellence in the surgical management of inflammatory bowel disease, serving as a guest lecturer and visiting professor around the globe. His academic milestones included nearly 200 articles, book chapters and abstracts, membership in sixteen professional societies, editorship of two journals: Perspectives in Colon and Rectal Surgery, and of Colon and Rectal Surgery Outlook, and several distinguished service awards.

In 1993, Dr. Schrock was appointed Interim Chair of UCSF Department of Surgery. In three short years, his effective leadership culminated in his permanent appointment as Chair of the Department in 1996. Two years later, he became Chief Medical Officer for UCSF Medical Center, remaining in that position until his retirement in 2004.

Early in his career, Dr. Schrock was a pioneer in the use of colonoscopy as a diagnostic and therapeutic tool for diseases of the colon and rectum, gaining national and international renown for his work.  He was a founding member of the Society of American Gastrointestinal Endoscopic Surgeons and became its President in 1988.  He was also a key figure in organizing the First World Congress of Surgical Endoscopy in Berlin in 1988, and was an invited participant to numerous world conferences and congresses on these subjects. 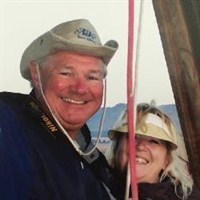 After retirement, he and his wife bred Arabian horses in Montana, later moving to Scottsdale, Arizona where they lived at the time of Ted’s passing.

There will be a celebration of Theodore (Ted) Schrock’s life on October 2, 2016, details of which are available at the family posting on CaringBridge.org. Those wishing to attend should visit the family page (registration required).

Posted on August 6, 2016 by Richard Barg
Posted in Uncategorized |

On Thursday, December 3, the UCSF Department of Surgery hosted a celebration was held honoring the illustrious career and accomplishments of William P. Schecter, M.D., F.A.C.S., F.C.C.M.

The celebration began with a luncheon and scientific session at the UCSF Mission Bay Conference Center moderated by M. Margaret Knudson, M.D., Professor of Surgery in the UCSF Department of Surgery at Zuckerberg SFGH. This was followed by a dinner celebration at AT&T Park in San Francisco. In honor of Dr. Schecter’s dedication and service  to SFGH, UCSF has established the “Trauma Resident of the Year” award.

View all photos of celebration

Posted on January 30, 2016 by Richard Barg
Posted in Uncategorized |

Marjorie Stanley Albo of Piedmont, California passed away peacefully in Orinda, California with her family by her side. Marjorie “Marge” was the beloved wife of the late Dr. Robert Albo, well known bay area surgeon and former team physician of the Oakland Raiders and Golden State Warriors for many years.

Posted on July 6, 2015 by Richard Barg
Posted in Uncategorized |

Among the winners was Bian Wu, M.D., the UCSF General Surgery Resident Liaison to the Naffziger Society and member of the executive council. Dr. Wu tied for the Best “Quick-Shot” Presentation.

Posted on July 1, 2015 by Richard Barg
Posted in Uncategorized |

Laurence F. Yee, MD, FACS, FASCRS has been elected the 66th President of the UCSF Naffziger Surgical Society for the 2015-2016 term. Dr. Yee is a general and colorectal surgeon and Associate Clinical Professor of  Surgery at UCSF. He also serves as Director of the Laparoscopic Gastrointestinal Surgery Program at CPMC. Dr. Yee is a fellow of the American College of Surgeons and American Society of Colon and Rectal Surgeons, and active in numerous professional societies .

Posted on May 30, 2015 by Richard Barg
Posted in Uncategorized |

A Personal Tribute to the Late Thomas R. Russell, MD

Dr. Thomas Russell is that once in a lifetime person and personality.

The 1 in a billion person.

And it was my great luck to be associated with him.

It is virtually impossible properly thank Dr. Russell for all of the teaching and mentorship he has personally provided me and all the hundreds of UCSF medical students and surgical residents who have had the privilege of working with him.

You have had a career and family that every surgeon aspires for.

Dr. Russell served as a US Navy surgeon during Vietnam, finished as Chief Resident in surgery at UCSF under Dr. William Blaisdell and Dr. JE Dunphy, recruited to join Dr. Peter Volpe in practice of colon and rectal surgery in San Francisco at age 33, succeeded Dr. Carlton Mathewson as Chairman of Surgery at California Pacific Medical Center at age 37, and left his surgical practice in his absolute prime at age 59 as he was recruited to become the Executive Director of the American College of Surgeons in Chicago succeeding Dr. Samuel Wells.

But to me, even more important than what you accomplished as a surgeon, was how you treated all people, whether they were patients, students, nurses, doctors, or even complete strangers.

…with respect, kindness, and compassion.

Posted on March 2, 2015 by Richard Barg
Posted in Uncategorized |

James Constant, MD, FACS was recently installed as the 65th President of the UCSF Naffziger Surgical Society. Dr. Constant is a general surgeon with a practice at Kaiser Permanente, San Francisco where he serves as Assistant Physician in Chief, Surgical Services and Perioperative Quality and NSQIP (National Surgery Quality Improvement Program) Surgeon Champion. Dr. Constant is also an Associate Clinical Professor of Surgery at UCSF and a Fellow of the American College of Surgeons.

Posted on September 23, 2014 by Richard Barg
Posted in Uncategorized |

Posted on September 23, 2014 by Richard Barg
Posted in Uncategorized |

A clinical investigation headed by UCSF transplant surgeon Peter G. Stock, M.D., Ph.D. (pictured far left) has led to the passage of the Hope Act lifting the ban on research into transplanting organs between HIV-positive donors and recipients. Dr. Stock was principal investigator on a large multi-center study testing the safety and feasibility of transplanting kidneys where both the donor and recipients were infected with HIV, the virus that causes AIDS. The group previously reported in NEJM that recipients of donated organs fared nearly as well as non-HIV infected recipients of similar transplants. A subsequent paper from Johns Hopkins projected that 500 to 600 H.I.V.-infected livers and kidneys would become available each year if the ban were repealed. Late in 2013, President Obama signed into bill a law overturning the ban on research in the area, a development with the potential to greatly increase the supply of kidneys to HIV-infected patients suffering from renal failure.

George F. Sheldon, MD, FACS, a great humanist and icon of American surgery at home and abroad, died of heart failure June 16, 2013 in Chapel Hill, NC. He was 78 years old. Dr. Sheldon was the Zack D. Owens Distinguished Professor of Surgery and Chairman of the department of surgery, chief of general surgery, and general surgery residency program director at the University of North Carolina (UNC), Chapel Hill.

Dr. Sheldon was a tireless advocate for the American College of Surgeons (ACS). He was elected the 79th President of the organization (1998-1999), after years of service as an ACS Governor and Secretary of the Board of Governors (1979-1982); as a member of the Board of Regents (1983-1992); on key committees and task force groups including the Committee on Trauma, Pre-and Post-Operative Care, and Communications. In 1985, he testified dramatically before Congress on behalf of the College to protect funding for graduate medical education. He was also first Editorial Advisor of the Bulletin of the American College of Surgeons.

Posted on August 8, 2013 by Richard Barg
Posted in Uncategorized |